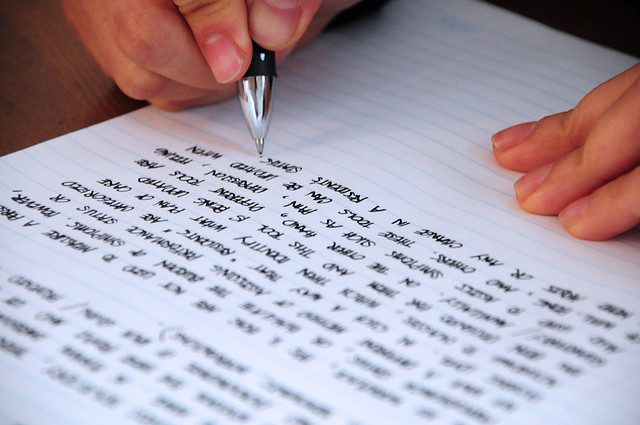 If you talk to some of the English teachers around South, you’ll find that some of them aren’t too happy with the phrase “creative writing.” The argument is that all writing is, in some way, creative. But some styles, people find, are more difficult than others.

The biggest enemy a writer will ever face is a blank page. Getting started, having an idea, knowing what to do with it, all the open-endedness to writing can often be the thing that holds people back the most.

One trick is to use this road blocker as a strength. As first sentences and titles can often be the hardest, an exercise used in many beginner college courses is to brainstorm a list of titles or first sentences with no thoughts in mind as to how the tale would go. Get a good list and then look back over to see if one of the starters you’ve formulated has caught your eye or stirred a thought. From there, pick one and just go with it.

Brainstorming is the birth of all writing, and many techniques begin with it. Creating a “Memory chain,” and listing small blurbs of events you’ve experienced, and then what those experiences remind you of in turn, can be another good way to get rolling with a list of ideas, as the Creative Writing Club at South learned a few weeks ago from its guest speaker, Mrs. Esris.

Or not focusing on the plot so much, as sometimes an interesting main character with believable, well-formed side-characters can be even more important than an interesting plot. Depending on the message you decide to deliver, as all writing is an argument of some form (even if that argument is something simple like “enjoy yourself” or “have fun”), a mediocre plot with proper introspection on the character’s part can carry you through just the same as a complex plot that removes and distracts the reader from the writer’s message.

Once you’ve got your idea, on the more technical side of things. Author Stephen King advises to watch for some common grammar flops. As young English students, many of us were passed out the popular ‘Said is Dead’ worksheets, but open up any critically acclaimed work and you’ll find that ‘said’ is very much alive. Using other words that are less common can often distract the reader, whereas simple words like “said” or “asked” are so natural to the eye that the story flows almost as if the words aren’t even there at all, and the reader is simply hearing the conversation. Let the dialogue and situation speak for itself as to if the comment was “shouted” or “cried” or “whispered” or “muttered.” Give your audience credit; they’re smarter than you think.

A writer’s job is to almost make the reader forget that you are there. That being said, one of the biggest mistakes of a writer is to try and “hide” behind one’s own story. Passive voice, Stephen King remarks in his memoir On Writing, is a coward’s tool. For example, saying “The body was moved by so-and-so,” and opposed to “So-and-so moved the body.” The former phrase is wordy and sounds too much as though on a will of its own the body up and carried itself off. The latter is more fluid and sounds more like everyday conversation. Except for when purposefully trying to disturb the normal pace of syntax, try to keep all words and phrases as natural sounding as possible. If you can’t believe your own writing, neither will your audience.

Some of the biggest advice I can lend about writing is to not write the parts that people aren’t going to read. Overly dragged out and confusing details slow a story down and can often confuse the situation. If it’s not important to the story that the chair in the far left corner of the room is diagonal set with arm rests and cushions that are red save the fact that the chair is so old and covered with so much dog hair and bleached from so many hours in the sunlight from the large window on the opposite side of the room that it’s actually grown to be rather pinkish… Then for goodness sake don’t write it! You’ll teach your audience that it’s okay to skim the narration, and that could lead to them missing valuable information later on.

The advice I have heard most often about writing is simply to keep doing it. Find time in your life every day for it.  Amber Benson, actress, writer, film director, and film producer, was once asked what the hardest part about writing is. Her answer was “writing.”

Force yourself every day to sit down for a set amount of time, even if you’re busy or have writer’s block or can’t work out a plot point or want to work on a different story or project for a while. The best thing to do is to just devote some time every day, even as few as ten minutes, to sitting down and writing something up. It can be a journal entry, a poem, commentary on the news, or anything at all. But just keep writing.

In a conversation with New York Times bestselling author Lisa Scottoline, she reminded me also that this holds true when faced with criticism. Not everyone will like the things you write and not everyone will be nice about it. But in writing, just as in every other creative pursuit, for as much as it’s about the audience it is equally about you, the writer, and your passion. Whether you write for others or strictly for yourself, it is a lesson in patience and confidence and strength and discovery of both your own world and the world around you. Once you’ve got the proper tools in your tool belt, then keep on exploring, explorer.