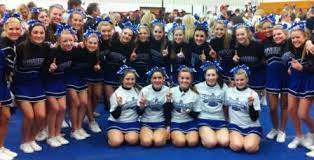 Blue, black, and white are the colors the cheerleaders of Central Bucks South wear with pride. Head cheerleading coach, Carly D’Angelo shared her experience working with the athletes of the cheer team, the brandishers of this trichromatic gimmick.

It is Coach D’Angelo’s first year of being head coach at South. Last year she was assistant coach, but after the resignation of former head coach, Jackie Britton, she took on the role.

Carly is experienced in cheerleading and coaching. “I started cheering in sixth grade,” D’Angelo said, “I began coaching cheer during my senior year of high school at Tohickon Middle School.”

She was not the first in her family to run a cheer team. “My mom was a coach, so she inspired me to become one,” D’Angelo said.

A typical day-to-day for Coach Carly includes checking emails in the morning, working as a Teacher’s Assistant during the day, going to lead practice, and then heading to the gym.

“After that I go home,” D’Angelo said.

It’s not easy coaching a team of 50 girls, while also balancing being a Teacher’s Assistant at Butler Elementary during the day.

“It’s very challenging, but I usually try to stay organized and keep my calendar up to date so that I know where I have to be and when,” D’Angelo said.

With the time she has left, Carly enjoys “going to the gym, shopping, watching tv, or just hanging out.”

Graduating from West Chester University, Coach Carly had been taking a bit of a hiatus from cheer.

“I didn’t want to commit to the time there. I stopped cheerleading after high school,” D’Angelo said. Currently, she is in grad-school to become a full-time teacher, in hopes of teaching first or second grade.

Carly’s coaching strategies focus on the positives, which help motivate the cheerleaders to perform better.

“I like to focus on the positives of my athletes rather than the negatives,” D’Angelo said, “It’s how they grow.”

She also likes to push the athletes with what they could use assistance with, while still showcasing the strengths they have.

“I try to look at everyone’s strengths and weaknesses and put athletes where I think they will succeed or do well,” D’Angelo said. “If there are skills where someone isn’t quite there yet, we have time at practice and tumbling to work on those skills and build up on their athleticism,” she says.

Being a cheerleader is not as easy one would think.

“It takes a lot of dedication and hard work, a lot of commitment and time” D’Angelo said. “You just really want to have to do it.”

Friday nights are football games and the team cheers on the sidelines then. The team will begin cheering for basketball in the upcoming months.

“The football games on Friday nights are a really exciting time,” D’Angelo said, “especially when you’re cheering for your team.”

In an average practice, the team takes the first ten minutes to warm up and stretch.

“Afterwards we run through our routines and clean things up, then go from there,” D’Angelo said.

Competitions are also on the upcoming schedule of events for the cheer team. The first event will be on November 13th, at Central Bucks East.

Coach D’Angelo strives to make it all the way through to nationals.

“We’ll have a couple of months to prepare for that, but will ultimately be the end goal for us,” Coach Carly said. The UCA nationals will take place in Orlando in February of 2022.

“[Competitions] can be a little intimidating at first,” D’Angelo said. Before performing, the team will “warm up, run through the routine a couple times, and then we perform it in front of the judges and fans,” D’Angelo said. Afterwards, there will be an awards showcase announcing who won in each division.

The transition from being a cheerleader to a coach was challenging but rewarding.

“It’s very hard because you don’t realize how much goes into it until you do it,” D’Angelo said, “But it’s a lot more fun to run things your own way. Just building this program myself is something I’ve never done before. Having all this ‘power’ so to say, has been probably one of my favorite moments.”