The Sweat Beneath the Sparkly Dress

She’s been doing the same routine for weeks. Working with her team on the perfect routine. Months of effort and years of determination have lead to this moment.

Christine Juliano has dedicated most of her life to synchronized ice-skating. Pouring countless hours into a sport of determination, grace, and teamwork.

In her early years, Christine contemplated the right sport for her. “I did softball, I tried ballet and dance,” she recalled, “I was even on a bowling team at one point.” Ice skating found its way to becoming her passion, and she’s been doing it ever since.

She says she knew she wanted to compete in a group after seeing older girls twirl and glide on the ice, synchronized together. That’s when she knew she had to get involved. “That’s  what I wanted to do,” she said, “I needed to be on that team.”

Since fifth grade, Christine has devoted her free time to ice skating. She has been competing as a synchronized skater for eight years now.

During the week, Christine says she and her team practice up to 5 hours in just one day.  This is not only rehearsing the routine, they use this practice time to warm up with drills and to do Pilates. On days that Christine has practice, she starts her day early. She goes to school everyday and leaves at 2:30 to get home in time for some food and homework. Then, she’s off to practice around 4 o’clock.

But as competitions near, the team picks up more hours at the rink. Sometimes Christine does not find her way home until midnight.

Christine’s type of team is called “open juvenile.” This team is a collection of people ranging from freshman to seniors. They practice at the local Hatfield Ice, and compete all across the state.

Not only does she spend lots of time working hard with her team, but she takes private lessons by herself. “I don’t think I am talented enough to competitively skate on my own,” Christine says, “but I want to be better for my team and set an example.”

Nevertheless, her team is her home. She says, “The relationships you make and the supportive community.” Christine emphasizes the importance of learning how to work and interact with a team. She says the everyone should have a chance to work on a team. To get close to the people  you work with to accomplish a goal. To become a family.

Although she does participate in one-on-one skating instruction, she proves to be a bigger asset to the group. She fears to the other members as closer than just teammates, stating, “We practice all the time together, we have this family kind of relationship.”

She stays humble, and can recognize her essential role on the team, saying, “I might not be the strongest, but I put on my best show.” She stays energetic and knows that she can act the part and put on an amazing show.

Philadelphia Symmetry, home of Christine’s team, says that synchronized skating is all about “teamwork, speed, intricate formations and challenging step sequences.” Christine works diligently to uphold these ideals put in place by her company.

She adds on to these ideals by saying, “You can’t just be a strong skater, you have to be a strong performer.” Being the best skater is not the only thing that matters in a sport liken this.  You must have, what Christine calls, “the right pizzazz.”

To Christine, figure skating is “a way for me to make new friends and bond with a team.” As one of the seniors on the team, Christine has the important task to keep the younger  team mates on track “we have to set an example for the younger teams. We set the mood of the  practices.” Christine has shown to be an important asset to her team. She keeps spirits high and gives  off her energetic personality “We push each other to always do our best.”

Being on a competitive team for most of her young life, Christine has seen many wins and losses. “If you mess up, who cares,” says Christine, “We are a supportive and loving family.” She says that being the best isn’t the only reason to work hard on the team. But she does admit that “if you can do any spin and jump, that’s automatically impressive to me.”

This passion does not come with a cheap price tag. Christine states that from the skates to  the hotels for competitions, no expense is spared.

Finishing the routine is not the only thing coming to an end. As a senior, Christine will step down from her position on her team to leave for college. Though bittersweet, she will give another young woman the experience to be on the team. 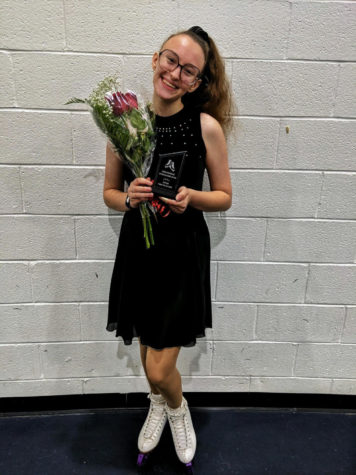 Christine after a skating performance