Putting the “Super” in “Superintendent” 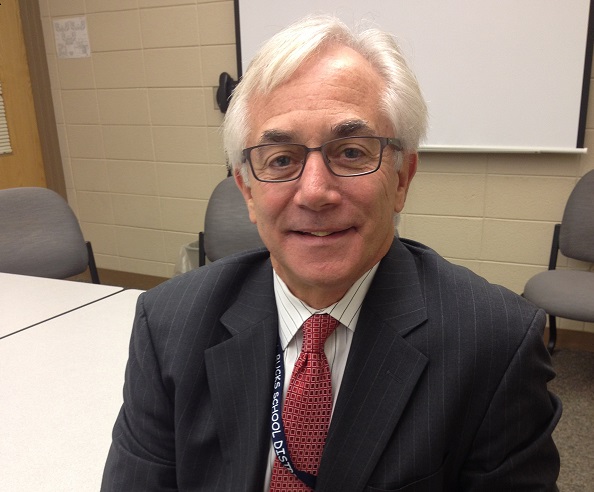 In July 2013, when Dr. Rod Green stepped down from his role as superintendent, Dr. Weitzel was chosen as Acting Superintendent. This meant he would temporarily act as the superintendent, taking on the full responsibility during this transition. Recently, he was appointed the permanent position as superintendent during the school board meeting on October 8.

While many are able to take a break from school during the summer, Dr. Weitzel admits he spent the majority of his time preparing for the upcoming school year.

However, he was able to spend time with his 10 year-old grandson, whom he said he loves very much, and he took a short trip in Key West, Florida for the first time and spent two days on a sailboat. “It was beautiful,” he said.

Dr. Weitzel’s favorite color is blue, and he enjoys golf in his free time. He loves college sports, most notably Notre Dame and Penn State. He also enjoys listening to all kinds of music and listens to a wide variety, even though he claims he can’t sing.

Since his childhood, Dr. Weitzel has always loved school and learning. He attended West Chester for an undergraduate degree, obtained a Master’s degree at Temple, and a Doctorate from Widener University for school administration.

He’s had different positions in different schools all over PA, ranging from teaching in Philadelphia, to working as an administrator in La Salle University, and serving as a principal in Warwick Elementary School.

This is his 16th year in CBSD, and he truly believes it is a “textbook example of what a good public school is.”

While he never aspired to be superintendent, he took the position since he has a “great deal of respect and affection for the school district,” and looks to “continue to move forward.”

So far he has been extremely busy and said, “I haven’t had a normal day yet,” but is “enjoying it a lot” and “can’t imagine not doing this.”

Dr. Weitzel believes we are very fortunate and that “wonderful kids” come here. He stressed the importance of principles and values.

In addition, he looks up to those who care for others, like teachers. “I’m drawn to people who want to help other people,” he said, “and felt myself gravitate towards them.”

He is occupied with many meetings, addressing everything from departments to facilities to finances. Every month he is required to talk to the principal of each school in Central Bucks. Dr. Weitzel is needed to respond to issues surrounding topics like safety and student concerns.

Even transportation requires a hefty amount of planning, since it covers 20,000 students, and 2,000 private school kids, especially because Central Bucks is the third largest school district in the state.

While Dr. Weitzel loves what he does, calling it the “hardest, best job” he’s ever had, he said, “it’s hard to get out.” He looks forward to try to meet as many kids as he can, in the spare time he has.

Dr. Weitzel explained that the hardest adjustment so far was leaving the kids and his school, Warwick, behind, while he transitioned to superintendent.

However, Dr. Weitzel has always kept his goals in mind no matter where his career has led him. In many aspects, his objectives have not changed. He feels “fortunate to be in the field of education” and strives to take care of kids. Yet as time went by, he realized the importance of communication. He believes adults need to collaborate professionally and find ways to talk to each other.

For a school district this large to operate, a lot of things have to happen. Many factors such as safety, budget, testing, and teacher evaluations have to be taken into consideration.

The State Performance Plan (SPP) is a score based out of 100. This score is dependent on things such as student data, PSSAs, Keystone exams, and attendance. South had an overall score of 97 out of 100, compared to East with 98 and West with 95. Overall, the average of all 23 schools in Central Bucks is over 90 out of 100, which Dr. Weitzel said “says a lot about the qualities of our school…something to be really proud of.”

While Central Bucks had done a superb job, other public schools have not earned as much recognition. Dr. Weitzel understands the different challenges of running a school district, and believes other schools are struggling with unfair treatment. He believes people are “unfairly critical of public schools” and that “society needs to change.”

Central Bucks is successful compared to other schools largely due to the staff, including teachers, principals, and staff developers, who talk and plan a lot for the students. Central Bucks has always had high standards, and one thing that will keep it successful is if we maintain these expectations and “not… take good for granted.”

In this school year, Dr. Weitzel plans to continue with the traditional way the district has been run. He credits much of the success of the schools to Dr. N. Robert Laws, who was superintendent of Central Bucks for 20 years, a tremendous amount of time compared to other superintendents who average a career of only three years. Dr. Laws instilled a constant focus on education and the district doubled in size, from 10,000 to 20,000 students, during his time here.

Dr. Weitzel wants to enforce core values of “rigor, relevance, relationships, resilience,” and said, “Simple sounding things are really important.” He is looking to focus on teaching students well. He believes evolutionary change over time is the best option, since people need time to adjust slowly to get used to the change.

He looks forward to continue what is being done, with the help of “so many good people accomplishing goals…we wouldn’t be where we are without them.”

At the elementary school level, several years have already been updated with new curriculum and materials. He has always supported curriculum coordinators, who each are in a charge of a certain subject from kindergarten to 12th grade, in order to build upon knowledge and provide students with experience.

At the secondary school level, Dr. Weitzel wants to make sure lessons are relevant and students are able to relate to the material. He stresses the importance of students learning to “break down stereotypes” and appreciate other cultures. He wants students to connect to the rest of the world.

Dr. Weitzel was able to experience this firsthand when he took a summer course during college, where lots of international students came from abroad. He sat with them during lunch and talked to them daily.  He was able to see outside the world he knew and gained a new perspective towards other people from different countries. He hopes “everyone could experience different cultures.”

Through his many years of work, Dr. Weitzel’s experiences have shaped him over time.

He said that the highlight of his career is being able to help kids learn and grow. He hopes he has made a difference and aims to create an environment for students.

Dr. Weitzel strives to make school a place for students to come and feel safe and comfortable.

He understands the importance of the environment a child grows up in, emotionally and physically, especially due to the circumstances that he faced surrounding the terrorist attack during 9/11. On that day, he had gone on the sixth grade Warwick ropes course field trip. They had arrived there just after the first plane had hit the tower. He will never forget how the ropes course director had told him that America was under attack.

Dr. Weitzel was an hour away from the elementary school with 100 kids, in addition to the teachers, and everyone had to get back to Warwick.

“I will never forget how I came back to Warwick and felt safe,” he said. “It was a real comfort to be with kids and teachers.” This reinforced the importance of a respectful, good community.

Through the knowledge he has gained working in the educational field, Dr. Weitzel advises students to “learn and work hard,” and adds that learning isn’t a substitute for hard work, and Dr. Weitzel certainly knows more than enough about both learning and working hard!

At the end of the day after a long series of note taking, testing, and hard work, it’s important to remember one thing amidst it all; every bit of effort is leading you towards a brighter future. A brighter future that you could not have had without the education you have been given, and an education that has been provided by Central Bucks, leading the way.