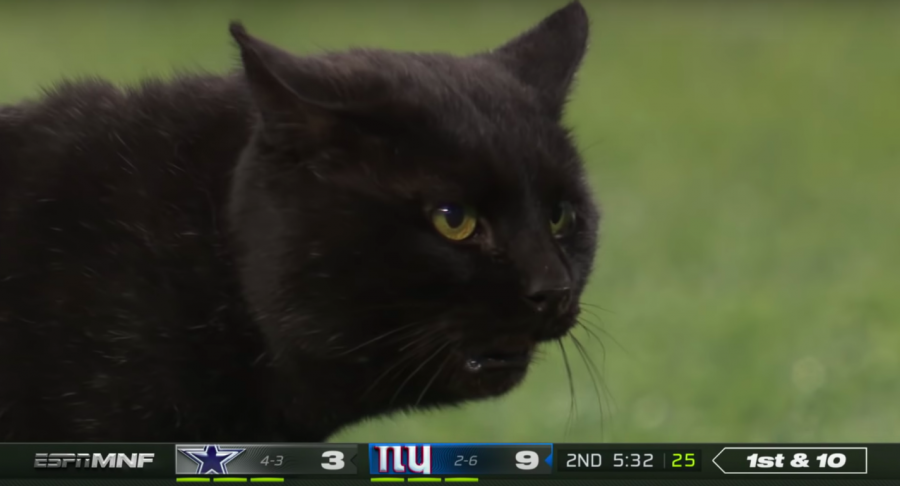 The Giants walked out to a 9-3 lead, shocking all the Dallas fans who believed it would be a cakewalk victory.

Then, disaster struck for the G-Men.

A feral cat ran onto the field and evaded capture the entire time. Fans were expecting a good run game match up with star running backs Ezekiel Elliott and Saquon Barkley, but a new competitor entered the stadium with fire in its eyes.

The Cat would end the night with 1 rush attempt, 114 yards and 1 touchdown.

To all my fantasy football players out there: PICK THIS CAT UP IMMEDIATELY!

The game would go on after this unbelievable performance, and just as the blackout in Super Bowl XLVII helped the 49ers, even though they went on to lose that game, Dallas went on a roll, defeating the Giants 37-18.

This means that The Cat won Dallas the game. Perhaps Jerry Jones made this happen, knowing it would provide bad luck to the Giants.

It’s possible; anything can happen in Metlife.

On an unrelated note did anyone else see Dallas corner Byron Jones get caught in mid-air by Saquon Barkley? Byron Jones has major hops but he tried to jump over a grown man!

Back on topic, The Cat (as of Thursday, November 7th) is STILL on the loose, easily making it the most evasive player in NFL history, avoiding tackles for three days and counting.

You can decide if The Cat is the best running back in the league, but my new MVP favorite is The Cat. If The Cat gets as many rush attempts as Christian McCaffery (or should I say Christian McCATfrey), The Cat would have 219 touchdowns and approximately 25,000 yards. SHEESH.

Only time will tell if this is truly the next generational talent, and we can only hope it stays out of trouble and doesn’t end up like Antonio Brown, mainly for one reason and one reason only: The Patriots would have The Cat for one game.