NBA: Game One and Counting 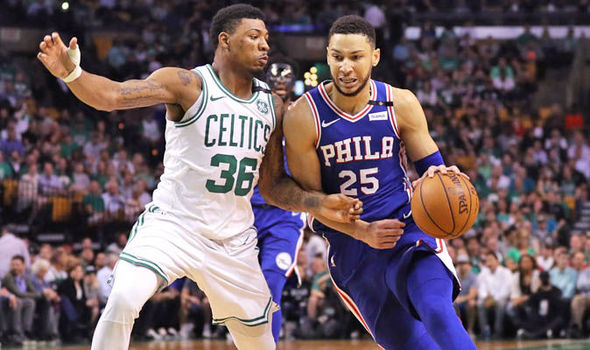 After a wild offseason, dominated by the news of LeBron James leaving the Cleveland Cavaliers to join the Los Angeles Lakers and help reinvent the purple and gold franchise, NBA fans everywhere couldn’t wait for the new season to start.

Adding to this excitement was the controversial decision of one of the best centers in the NBA, Demarcus Cousins, to join defending NBA champions and the team who has won three out of the last four NBA titles, the Golden State Warriors.

Finally, if there wasn’t enough drama to begin with, the Toronto Raptors made a blockbuster trade sending franchise cornerstone Demar DeRozan and Jakob Poeltl to the San Antonio Spurs for disgruntled superstar Kawhi Leonard along with Danny Green. All these factors combined to promise an exciting opening week in the NBA.

And it did not disappoint.

The 2018-19 NBA season began on Tuesday, October 16 with a pair of heated matchups, including the Philadelphia 76ers renewing their historic rivalry with the Boston Celtics in Boston. It was a defensive grind-it-out game, which saw the Celtics handily defeated the 76ers in a final score of 105-87.

The Celtics’ emerging star Jayson Tatum led the way with 23 points and 9 rebounds and the Sixers’ own emerging stars, Ben Simmons and Joel Embiid, got a taste of reality, still being one notch below the Celtics.

The nightcap game featured the defending NBA champions, Golden State Warriors, claiming their rings and then playing Kevin Durant’s old team, the Oklahoma City Thunder in the Bay Area. The Warriors took full advantage of Thunder superstar Russell Westbrook sitting the game out with a knee injury and cruised on their way to a 108-100 victory. Sharpshooter Stephen Curry led in scoring for the Warriors with 32 points.

The second day of the regular season featured most of the other thirty NBA teams opening their season headlined by Anthony Davis and the New Orleans Pelicans upsetting James Harden and the heavily favored Houston Rockets in Houston. The Rockets had battled it out in a thrilling seven game series in the Western Conference Finals with the Golden State Warriors last May before ultimately falling. Many people were shocked to see them get blown out by the Pelicans with a final score of 131-112.

In other news, Kawhi Leonard’s debut with the Raptors was a resounding success as Toronto was able to defeat the Lebron-less Cleveland Cavaliers with a final score of 116-104 in Toronto.

The Philadelphia 76ers notched their first win of the season on Thursday, in their home opener against the rebuilding Chicago Bulls. Although Embiid fought his way to 30 points and 12 rebounds and Simmons had the first of what is sure to be many triple doubles with 13 points 13 rebounds and 11 assists, the dominating story of the game was 76ers guard Markelle Fultz making his first NBA three pointer.

Why is that such a big deal?

Well, after being billed as one of the best point guard prospects in recent memory and going number one in the 2017 draft to the 76ers, Fultz suffered a mysterious shoulder injury which prevented him from being able to shoot the basketball. After a summer where he took over 150,000 shots, he has made improvements to his jump shot, although it still isn’t 100%.

Thursday also saw what many people were waiting to see since he made his decision in early July: LeBron James’ debut with the Los Angeles Lakers. The hyped-up first contest between the final two teams to play their first game didn’t go the way of the Lakers as the Trail Blazers used their raucous crowd to power them to a 128-119 victory. Superstar point guard Damian Lillard paced the Blazers with 28 points while LeBron had 26 points 12 rebounds and 6 assists in the defeat.

After it had seemed like eons since the Golden State Warriors swept the Cleveland Cavaliers to win the 2018 NBA Title, the NBA season is finally in full effect.

Which players will have breakout seasons and quest for the prestigious NBA MVP award? Which rookie will separate himself from the pack and jump-start his career with a Rookie of the Year award? Which NBA team will come out of nowhere to shock the world in the playoffs?

These questions will all be answered as thirty teams, led by some of the best basketball players in the world, will fight tooth and nail until a new champion is crowned, all while providing daily highlights. Buckle up, it’s going to be crazy.