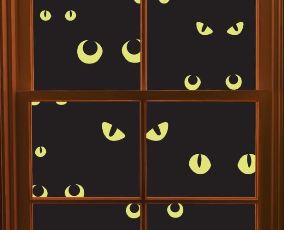 It was a cold, stormy October night, the day of Halloween. Feeling too mature for the tricks and treats of the special day, Josh found himself fixated on the couch devouring confectionery of varying colors. What lied in front of him was an ancient, but workable tv-the kind of which you had to smack for compliance. His fingers barely grasped the remote as they flipped through the channels in an thoughtless manner.

“Nothing good is on. Bummer-“

A reverberating ding dong interrupted his inner monologue, and so he abandoned the comfort of the leather and languidly approached his front door. “It was probably some brat faced neighbor kids”, he told himself.

Swinging the door open, Josh began to reprimand the supposed trick or treaters…

…and was met with a cool breeze and eerie silence. That was odd, he thought. After surveying the premises for any lingering kids, he closed his door and sauntered toward leather heaven. As he maneuvered himself into optimal comfiness, the teen quickly realized that no longer was he watching Keeping Up with the Kardashians; instead, the male was met with disheartening static. Same old drill. He got up, walked over, smacked the tv. Nothing. Must be the storm.

Josh scowled at the loss of his entertainment. A month prior,  his phone was confiscated due to his deficient grades. Everyone failed that Chemistry test he pouted to no avail. His mom still took it.

As he was looking around, he decided the best course was to remain on the couch and relax when suddenly the home phone began to ring repeatedly. Simultaneously, Josh’s heart felt uneasy. A looming sense sense of dread overcame him. “It’s just a phone call. Just a phone call.” Josh continued to reassure himself as his hands slowly grabbed the phone.

Nothing but the monotone recording of the voice message lady. Shivers ran down his spine as he cautiously placed the phone down. It must be a prank. Someone’s just pranking me, that’s all… But who?-

Almost as if by cue, Josh detected scraping noises… from the window. His eyes dilated as they slowly came closer to the window and had it in view… Nothing. I’m… Just being paranoid. Everything is fine.

Forcing the butterflies in his stomach down, he returned to his couch and calmed himself. Count to ten. One. Two. Three. Four. A doorbell ring. F-Five. S-Six. S-Seven. Another doorbell ring. More persistent and forceful. EIGHT. NINE. TEN.

The sound of a door opening.

“-Joshua Christopher Wiberstein. I would like to have a word…”

His heart resumed. It was just his beloved mother: the one who makes him Mickey Mouse pancakes for Christmas, still buys double the presents and doesn’t merge Christmas and his birthday, and loves and cherishes and protects him.

He embraced her much for he desired her unconditional warmth and protection. She was playing a mighty trick on him, and he was terrified. Shook even.

“Mom. Why were you playing those tricks on me?”

“The doorbell. The static tv. The phone call. The scraping of the window… Pretty far as a Halloween prank in my opinion…”

“I couldn’t find my keys so I rang the doorbell. After a while of you not answering, I went to the back and tried to find my extra set when I tripped into the tv receptor… I dont know why James put it near the back door, but he did. I called you so you could open the door. No reception…”

“You didn’t scrape the window?”

“I never went near a window.”