An Elite Swimmer: A Student Spotlight on Lauren McCarthy 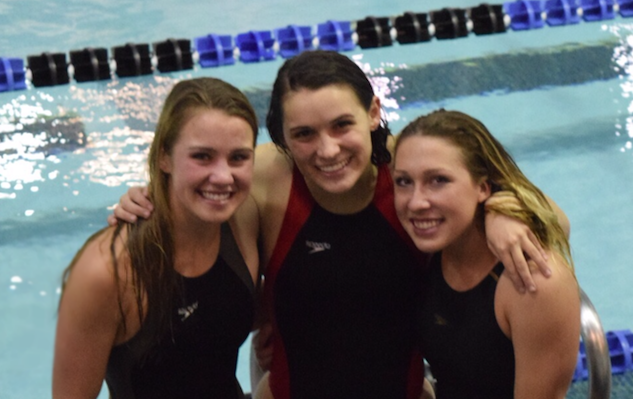 Senior Lauren McCarthy has been swimming for “as long as [she] can remember.” Her love for swimming began when she was just a little kid down at her family’s summer home in Longport, New Jersey.

Every day, when Lauren and her family went to the beach, Lauren would spend hours in the ocean. Her family used to say to her, “Lauren, if you spend anymore time in that ocean, you’re going to turn into a fish.”

Lauren’s parents saw her love for swimming and the water, so they signed her up for a summer swim team.

“I still remember the day my parents told me they signed me up for a swim team,” she said. “It felt like Christmas morning.”

Every summer morning, Lauren would wake up early and throw on her bathing suit and head out to swim practice.

Lauren said she remembers working very hard on getting the right technique down for certain strokes. Although she was particularly good at most of the strokes, “butterfly always gave me the hardest time,” she said.

“It was the way I had to move my body; it didn’t feel natural,” Lauren said. She had to work especially hard when it came to this stroke, and she wanted to master it.

Now, as a senior in high school, Lauren McCarthy is a captain for the girls swim team and takes on many roles and responsibilities.

She is also a two-time varsity letter swimmer who pushes the bar high for herself and always wants to improve.

As captain of the girls swim team, she helps decide on the team bathing suits, plan fundraisers, and organize pasta parties. Lauren also is in charge of getting the other swimmers excited and motivated about meets. Not only does she need to get them motivated for meets, but she also has to make sure that they are pushing themselves to new limits at practices.

This swim season is just getting underway with only three meets so far. The girls swim team is undefeated and they are continuing to work hard to have the best season yet.

Lauren has played a big role in keeping her team undefeated. She usually places in the top three for her two best strokes: freestyle and breaststroke.

The boys and girls swim team practice “very, very long and hard,” Lauren said.  Everyday after school the swimmers are in the pool by 2:45 and don’t get out until 5:15.

Lauren tries to make sure that she is there every Tuesday and Thursday morning before school at lifting. This helps builds her strength to perform her best in her meets.

Saturday morning practices push Lauren even harder than weekday practices do, she said, because they have to swim an even longer lap in the pool, which requires more time and energy for each lap. Also, Saturday practices don’t end until 11 a.m.

Lauren said she has many goals that she wants to break this year, including “maybe breaking a school record.”

Lauren said she will “always work hard and push myself to places that I didn’t think were possible.” She knows that when her senior year of high school is over, her competitive swimming career is too.

Lauren is not going to swim in college because she believes that “there are other things out in this world that can make [her] into a better person and change [her] life in the process.”

Besides swimming, Lauren runs cross country for South, and until this recent year, she played softball for both South and a private travel team. Lauren said she also likes to “volunteer and give back my time because my parents have always made an effort to give back to our community.”

While Lauren McCarthy’s swimming career is coming to an end this year, she said, “I will never forget the memories and friendships swimming gave to me, and I will always have a very strong love for swimming and the water.”